What is cognitive neuroanatomy?

If you have not heard of cognitive neuroanatomy, that’s because the formal definition is forthcoming (Weiner & Yeatman, in press). We include it here because it is the foundation of the lab. Cognitive neuroanatomy aims to explain how microanatomical structures generate macroanatomical functions contributing to measurable behaviors. At the heart of cognitive neuroanatomy is the goal to derive linking functions that can relate (a) behavioral output to (b) functional organization of the brain across spatial scales to (c) anatomical organization across spatial scales. The benefit of such functions is that once they are derived, human behavior could be predicted from cellular or receptor measurements alone (and vice versa), or accurate levels of a neural system could be predicted from a local (e.g. functional area or anatomical area) measurement or behavior. Additionally, deviations from predictions could potentially identify outliers, which has translational applications as a quantitative, data-driven method for discriminating patients from typical controls, as well as for developing interventions related to human-specific aspects of cognition such as reading and learning in the classroom. The downside of working toward developing such functions is that feasibly, they will take decades to develop and require international collaborations across labs. The upside is that while we may not see the ultimate linking function (e.g. the center f(x) in Figure 1a) in our life time, we will have worked together to establish the foundation to develop such a linking function and we will witness improvements to this foundation over the decades to come. 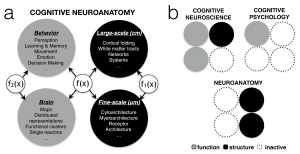 Figure 1. Cognitive neuroanatomy: The intersection of three different subfields of psychology and neuroscience. (a) Cognitive neuroanatomy works toward building mechanistic models explaining how microanatomical structures (lower right) generate macroanatomical functions (lower left and upper right) contributing to measurable behaviors (upper left) with an emphasis on deriving specific linking functions (depicted as fy(x)) with the ultimate intention of deriving the center linking function. (b) Cognitive neuroanatomy integrates and is composed of three branches of psychology and neuroscience that consist of different combinations of the four quadrants in (a): (1) cognitive neuroscience which combines behavior with functional and structural features of the brain (3 quadrants), (2) cognitive psychology which incorporates function and behavior, as well as modeling (1 quadrant), and (3) traditional neuroanatomy which examines the structural features of the brain across spatial scales (2 quadrants). Gray: function; Black: structure; Dotted line: inactive. From Weiner, Yeatman, and Uncapher, in preparation.

To download stimuli to localize domain-specific regions selective for faces, bodies, places, objects, and characters, all of the information you need can be found here: http://vpnl.stanford.edu/fLoc/.

To download cross-validated cytoarchitectonic regions of interest within ventral visual cortex, all of the information that you need can be found here: http://vpnl.stanford.edu/vcAtlas/.

To download the most probable location of place selectivity in medial ventral temporal cortex as label files for FreeSurfer, all of the information that you need can be found here: http://vpnl.stanford.edu/PlaceSelectivity/.