The experiments conducted by the CNL are conducted at the single subject level, which enables precise assessments of brain structure and function that are especially useful for translational applications in patients. In recent years, we have used our approach in individual participants undergoing surgical interventions for epilepsy. For example, in collaboration with the Parvizi lab, we have related the localization of fusiform face-selective regions with our high-resolution fMRI protocols to cortical sites that were electrically stimulated. This combinatorial approach has led to rare insight into the causal role of fusiform face-selective regions in face perception as seen here in the following video from that study:

Additionally, in collaboration with the Rossion lab, we have leveraged our experience with longitudinal fMRI measurements of high-level visual cortex to examine the effect of cortical resection on the layout and functionality of cortical networks.  We did so by conducting multiple fMRI sessions before and after surgery, as well as collected diffusion MRI measurements pre- and post-resection. Together, the combination of fMRI and dMRI in this study not only provided rare causal evidence in humans supporting non-strict processing hierarchies, but also set a new standard for future case studies implementing neuroimaging in patients. 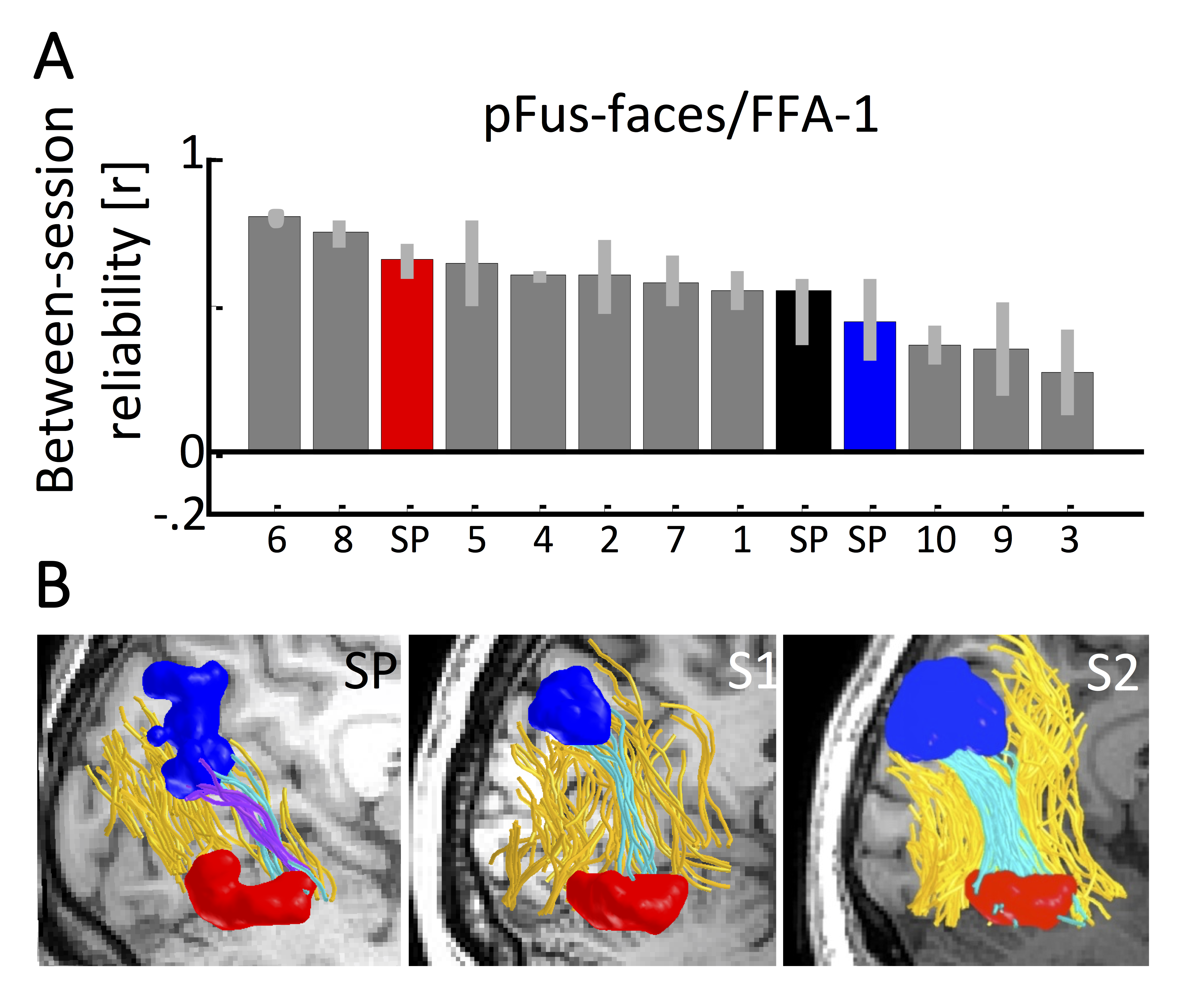 (A) Between-session reliability of distributed face selectivity in individual voxels in 10 controls (gray) and patient SP (red: pre-resection; black: post-resection; blue: pre- to post-resection). Nearly a quarter (23.3%) of pFus-faces and all of IOG-faces, which is considered the input to pFus-faces, were removed in the surgery. (B) The vertical occipital fasciculus (VOF) in SP and controls. Fibers terminating in pFus-faces (red) and a region outside the face-network (V7/IPS-0 in blue) are in cyan for controls and SP pre-resection (purple: post-resection). Adapted from Weiner et al., 2016

We will continue to collaborate with neurologists and neurosurgeons on future cases, as well as provide insight for translational applications in other disorders such as autism. For example, in a rare study of the fusiform gyrus comparing the cytoarchitecture between participants with or without autism, Van Kooten and colleagues (2008) write: “The fusiform face area (FFA) within the fusiform gyrus could not be identified separately because neither gross anatomical landmarks nor cytoarchitectonic criteria have been established in the literature to identify the FFA within the fusiform gyrus in human post-mortem brains.” From our high-resolution fMRI work as well as our studies of the cytoarchitecture of domain-specific regions, we have identified anatomical landmarks that identify face-selective regions as well as cytoarchitectonic transitions, which can guide future studies.